This peculiar mask collected by the National Museum was unearthed at the Sanxingdui site in Nanxing Town, Guanghan, Sichuan. It is 85.4 cm high and 78 cm wide. The eyes of the mask are columnar and protruding, reaching 9 cm long, with huge ears and a straight nose. And wide, the mouth has three layers of lips, and it is wide to the base of the ear, and the corners of the mouth are upturned in a smile, which is very mysterious. The top of the bridge of the nose is also inlaid with decorations as high as 66 cm, which look like both the sky-high cirrus pattern and the Kui dragon about to take off, which is extremely grotesque.

Sanxingdui has unearthed many bizarre cultural relics, which are very rare in the history of Chinese archaeology. Therefore, once the Sanxingdui site was published, it attracted great attention. The large number of bronzes unearthed from the Sanxingdui site are basically sacrificial items. Experts speculate that the ancient Shu Kingdom may have experienced a change of dynasties at that time. After the new dynasty held the sacrificial ceremony, it buried the heavy weapons of the ancestral temple of the previous royal family in the pit. These sacrificial items show that the primitive religious system of the ancient Shu Kingdom has been relatively complete.

The discovery of Sanxingdui Ruins opened the door for people to understand the cultural history of the ancient Shu Kingdom. The bronzes unearthed in the site are mainly in the shapes of figures, animals, insects and snakes, and plants. The bronze heads, faces and masks represent the ancestral spirits being sacrificed; the bronze standing and kneeling figures represent the worshipers and those who preside over the sacrifices; the bronze masks with protruding eyes and the flat bronze The animal face and so on may be the natural gods worshipped by the Shu people; the bronze sacred tree in the shape of plants reflects the religious awareness of the Shu people's plant worship.

Among the cultural relics unearthed in Sanxingdui, the cultural relics that represent human "eyes" are not only peculiar, but also numerous. This dazzling copper mask is the most typical representative. The eyeball of the mask is extremely exaggerated, and the pupil part is cylindrical and protrudes forward for up to 9 cm. This mask is not only huge, but also very heavy. It should be a sacrificial utensil.

Why did the ancient Shu people attach so much importance to portraying the eyes?

Why did the ancient Shu people attach so much importance to depicting the eyes? Why is the pupil of the copper mask's eyes cylindrical? According to experts, this may be related to the ancestors of the ancient Shu people who worshipped silkworms. "Huayang Guozhi" records: "The silkworm cong of the Marquis of Shu, whose eyes are vertical, was called the king", and its tomb is called "Zongmu Human Tomb". What exactly does "Zongmu" look like? Scholars of the past dynasties have been puzzled by this, and even regarded it as a myth and legend, until 1986, when this bronze mask was discovered in the Sanxingdui sacrifice pit in Guanghan City, Sichuan Province, people speculated that, The so-called "longitudinal eyes" refers to the raised cylinders of the eyes on the copper mask. Therefore, the image of the bronze mask unearthed in Sanxingdui is very likely to be the god statue of the ancient Shu King Silkworm Cong. 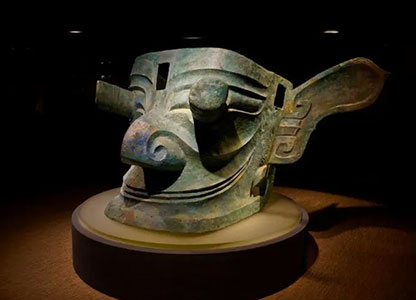 So, why do silkworm Cong's eyes look so peculiar? According to historical records, King Silkworm Cong of Shu lived in Wenshan County, in the upper reaches of Minshan Mountain in northwest Sichuan. This place "has alkali stones, which can be fried to obtain salt. The land has just been brined. It is not suitable for grains.” From this, it can be seen that the salt eaten by the local people in ancient times was made of rocks and soil, and the water and soil were seriously deficient in iodine, which made people susceptible to hyperthyroidism. An important feature of hyperthyroidism patients is that the eyeballs turn outward. Protruding, therefore, some experts speculate: King Shu's Silkworm Cong is likely to be a patient with severe hyperthyroidism. His eyeballs were particularly protruding before his death, and his descendants grasped this feature when they created the silkworm cluster. And further exaggerate and deify it, so there is this peculiar "vertical" image.

Another peculiar feature of this bronze mask is the columnar decoration above the bridge of the nose. What is the function of this peculiarly shaped ornament is still a matter of debate. Experts speculate that it is most likely an intermediary that represents the communication between the sacrificer and the gods and heaven.