China's treasured bronze ware, the discovery of "He Zun"

There is a very peculiar phenomenon in the history of archaeology. Many national treasure-level cultural relics are not discovered by archaeological experts, but by ordinary farmers unintentionally. In June 1963, in Jiacun Town, Baoji City, a farmer named Chendui accidentally found a bronze ware. This bronze ware was found on the earth cliff behind his house. When it was first unearthed, the bronze ware was covered with rust and looked no different from scrap. Chen Dui thought this thing was worthless, and when he moved, he gave this bronze ware to his friend Chen Hu. However, Chen Hu didn't know the value of this bronze ware. Later, because the bronze ware took up space at home, he finally sold it to a waste collection station as junk, and only exchanged 30 catties of corn.

At that time, very few bronzes were discovered. Baoji City was a place where many bronzes were unearthed. At that time, Baoji Museum did not have a single bronze collection. Many precious cultural relics were discovered by the staff of the cultural relics protection department, and this bronze ware is no exception. In 1965, Tong Tai, a staff member of the Baoji City Museum, saw this bronze ware at the waste collection station. Based on his own experience, he concluded that it was an important cultural relic, and told the news to Wu Zengkun, the then curator of the Baoji City Museum. 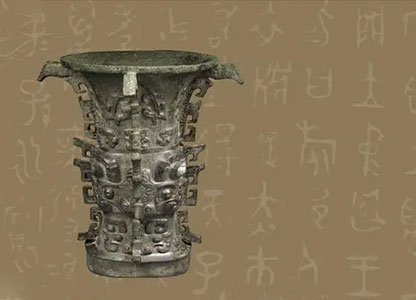 In 1975, Baoji Museum sent the "Taotie Bronze Zun" to the State Administration of Cultural Heritage as one of the national treasures to be exhibited in Japan. Mr. Ma Chengyuan, a famous cultural relic expert, found something strange after watching the bronze statue. After cleaning up the rust and soil on the surface of the bronze statue, he found a 122-character inscription at the bottom of the bronze statue. Through the interpretation of the inscription, it is known that this bronze ware was cast by a man named He, so the "Taotie Bronze Zun" was finally renamed "He Zun" and became a veritable national treasure.

Some people may have doubts, "He Zun" is just an ordinary bronze ware, even if it has a certain historical value, but what virtue and ability does it have, and can it be called a treasure of the country? It can be said that it is no exaggeration to regard "He Zun" as the treasure of the town. Because cultural relic experts found the four words "Zhaizi China" in the inscription on "He Zun", this is the earliest record of the word "China", which means that the name of China has been used as early as the early Western Zhou Dynasty. established. For all Chinese, "He Zun" is a veritable treasure of the township.