The archaeological work of Tomb No. 1 has officially begun. One day, everyone was looking for cultural relics in the tomb, and suddenly, an archaeologist exclaimed "Oops"! I saw that his hand had been scratched and blood was flowing. And in the cemetery, a sharp claw appeared. Then, a mythical beast with wide-open eyes and a roaring mouth was unearthed. Judging from its shape, it seemed to be ready to leap into the air at any time. The first cultural relic unearthed in Tomb No. 1 is such a vivid and imaginative bronze artwork, which surprises archaeologists, and they have more expectations for Tomb No. 1.

After excavation, among the large number of exquisite cultural relics unearthed from Tomb No. 1, there are bell tripods, chimes and bronze ritual utensils that symbolize kingship and ritual music, and a large number of them are quirky and magnificent daily necessities. With the unearthed one after another of exquisite cultural relics, the whole excavation seems to have reached a climax, but the archaeologists always feel a little lost. Because the key words to prove the exact identity of the owner in the tomb have not been found yet.

Until a leader came to inspect, archaeologist Chen Yingfu introduced all the unearthed Zhongshan cultural relics one by one. After listening to this, the leader said: You said this is a cultural relic of Zhongshan, how did you determine it? Why didn't I see the word "Zhongshan" on the cultural relics? These few words just spoke to everyone's heart disease, and the mood at the scene was depressed again. At this moment, a mechanic at the excavation site suddenly shouted. 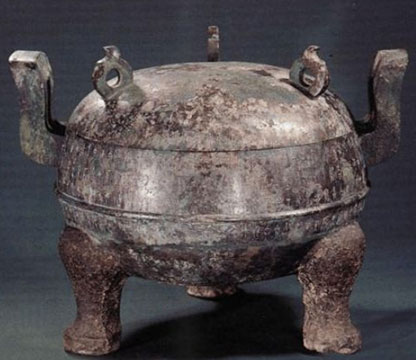 The inscription says that in 314 B.C., when the state of Yan was attacked by the state of Qi and civil strife, the king's house in Zhongshan abandoned the alliance that he shared with the state of Yan, and attacked the state of Yan in three ways, occupying hundreds of square meters of the state of Yan. territory in. This huge bronze wine vessel was specially made to commemorate the victory in the crusade against the Yan Kingdom. Even the materials for making this wine vessel were brought from the defeated country of Yan. The pride of Zhongshan King's House is beyond words.

The identity of the King of Zhongshan has finally been confirmed! At this time, a bronze round pot attracted everyone's attention. Curious archaeologists found that the lid of this round pot was difficult to open, but when shaken it found that the pot was obviously filled with liquid. What's in it? The archaeologists carefully removed the forehead patina on the lid, and then opened the lid. Immediately, a burst of wine aroma came. It turned out that this was wine that was buried deep underground for more than 2,000 years, which surprised everyone present.

It turned out that when King Zhongshan passed away, Zhao State, who had a feud with Zhongshan State, was practicing "Hu clothing, riding and shooting", but in Zhongshan, soldiers were neglected, farmers were lazy in farming, political corruption, and people were distracted. . In 296 B.C., when the iron cavalry of the state of Zhao rumbled over, the sixth king of Zhongshan fled and died in a foreign country. During the crisis, the wife of the king's house, who was still alive at the time, was exiled. With the departure of the former queen, a country that once shone through turmoil dissipated.

This excavation finally revealed the secrets of Zhongshan, which had been hidden for more than 2,000 years. The once country of a thousand rides, Zhongshan, eventually declined and collapsed. The reason for this also makes us, more than two thousand years later, have to think deeply and wake up.